The situation in Europe

The roots of World War I date back to the 1860s. The German kingdom of Prussia wanted to unite different German states into one nation and launched a series of wars to do this. In 1871 Prussia had united Germany and proclaimed the birth of the German Empire. This new German nation quickly industrialized and became a huge and powerful nation.

During the process of uniting Germany the Prussians had attacked France over land on the German border. Germany defeated France and from that point France and Germany were enemies. Germany also signed alliances with Italy and with Austria-Hungary, witch on that time was a huge empire in Europe and controlled most of southeastern Europe. These three nations became known as the "Triple Alliance".

Russia and Austria-Hungary was at this time competing for influence in southeastern Europe. Many of the people there were Slavs, the same ethnic group as Russians, and Russians wanted to support them against Austria-Hungary. Russian leaders were also nervous about the Triple-Allianse, because they feared that Germany intended to expand eastward into Russia. So to protect themselves Russia made the Franco-Russian Alliance in 1894 with France witch had the same interest as Russia to oppose Germany and Austria-Hungary.

In southeastern Europe a strong sense of nationalism had also risen especially in the region known as Balkan. Historically this region had been ruled by the Ottoman Empire and the Austro-Hungerian Empire. These empires were made up of many different nations. Some of the groups pushing for independence were the Serbs, Bosnians, Croats and Slovenes. These were all a part of the ethnic group Slavs. They all spoke similar languages and vied themselves as one people. The first of these groups to form a nation was the Serbs, they formed the nation Serbia between the Ottoman Empire and the Austro-Hungerian empire. They viewed it as their goal to unite the South Slavs. 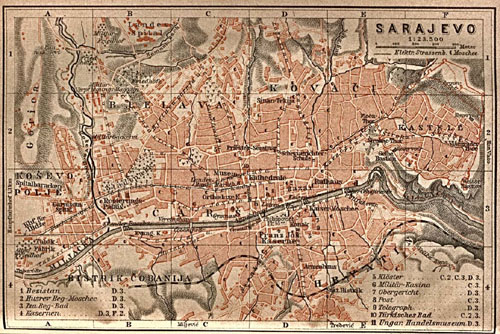 Russia supported the Serbs while Austria-Hungary did what they could to stop Serbia's growth. They annexed Bosnia in 1908, which at that time belonged to the Ottoman Empire. This made the Serbs furious because they wanted Bosnia to be a part of their nation. The Serbs now disliked the Austria-Hungary empire because they clearly had no intentions of letting the Slavic people become independent.