Late June 1914 the heir to the Austor-Hungerian throne, the Archduke Franz Ferdinand, visited the Bosnian capital of Sarajevo. On June 28th Franz Ferdinand and his wife drove through the city, while they were driving a Bosnian revolutionary named Gavrilo Princip ran too the car and shot the couple to death. The assassin was a member of a Serbian nationalist group nicknamed the "Black Hand". 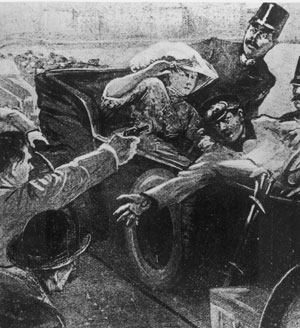 The Serbian officials knew that the assassination would take place and hoped to start a war that would take down the Austro-Hungerian Empire. The Austro-Hungerian government in return blamed Serbia for the attack and decided the time had come to crush Serbia in order to prevent Slavic nationalism from undermining the empire.