When Russia left the war Germany on the east side of Germany they were now free to focus on the Western Front. They launched a massive offensive along the Western Front on March 21, 1918. Germany pulled all their troops out of Russia and moved them to the west. Germany now had a much greater force than the Allies and pushed easily deep into Allied lines. By early June they were less than 40 miles from Paris. 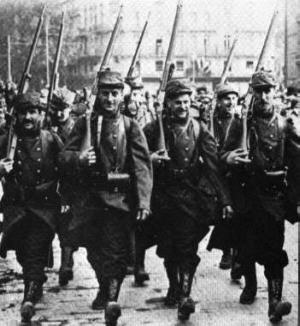 The American soldiers were now going to play an important role. The fresh and healthy soldiers coming from America boosted the Allied forces. In late May the Americans launched their first major attack on the German offensive and successfully captured the village of Catigny. Germany still tried to take Paris but on June 1 American and French forces worked together and blocked the German drive against Paris at the town of ChÃ¢teau-Thierry. The Germans still didn't give up and on July 15 they launched a last and desperate attack against Paris, but American and French forces successfully held their ground.