The "Lusitania" was sunk by a German U-boat

May 7, 1915 the British passenger line "Lusitania" entered the war zone, even though Germany had warned that they would shoot all ships around Britain. The ship was sunk by a German submarine killing nearly 1200 passengers included 128 Americans. This created uproar in the U.S. with people claiming it was a act of terrorism. Wilson was determined to keep the U.S. out of the war and refused to take any extreme measures against Germany. He said the U.S. was "too proud to fight". But he did send diplomatic notes to Germany insisting that they had to safeguard the lives of noncombatants in the war zones. 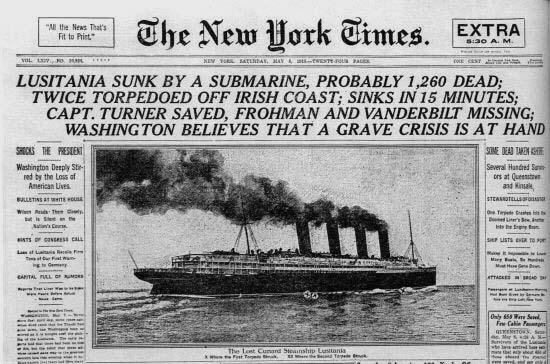