Shortly after the war began Britain sent their navy to block off Germany to keep them from obtaining supplies. The British Navy also planted mines in the North Sea and forced neutral ships into port for inspections in case they were trying to transport valuable materials to Germany or any neutral nations close to Germany.

Germany also knew that the Allies needed supplies from the United States, and they knew that if they could stop that trade they could starve the Allies into surrendering. But Germany had a problem; the British navy was blocking the sea for them. To solve this problem they took use of a new technology, the U-boats, submarines. They could now travel under the British navy. Germany announced in February 1915 that they would try to sink any ship they found in the waters around Britain, without warning. 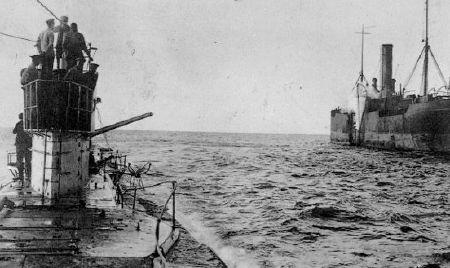 The United States and other nations did not take this announcement lightly. To attack a civilian vessel without warning was violating an international treaty stipulating that military vessels must reveal their intentions to merchant ships. The Germans on the other hand claimed that merchant ships actually were warships in disguise and that they faced great risk if they revealed themselves before firing.