The Treaty of Versailles 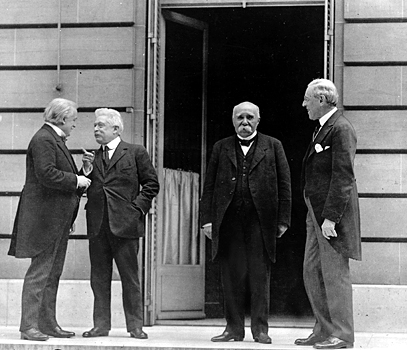 President Wilson had earlier presented his plan for peace, the Fourteen Points, to Congress one year earlier in January 1918. His plan was based on "the principle of justice to all peoples and nationalities". The most important point in his plan was the fourteenth point. This called for a creation of a "general association of nations" known as the League of Nations. This League would help preserve peace and prevent future wars.

The other allied nations did not agree with Wilson's plan believing it was too lenient toward Germany. Finally they got to an agreement, even though Wilson was not pleased, and the Treaty of Versailles was signed by Germany on June 28, 1919. The treaty stripped Germany for all military forces and they had to pay war damages for $33 billion to the Allies. But most humiliating for Germany was that they had to take the guilt for the outbreak of the First World War.

The European map was also going to be changed after the war. The four empires the Russian Empire, the Ottoman Empire, the German Empire and Austria-Hungary were all gone. And nine new countries were established including Yugoslavia, Poland and Czechoslovakia.