The Great War breaks out

The Austro-Hungerian government blamed Serbia for the assassination on Franz Ferdinand, but they also knew that launching an attack on Serbia would trigger a war with Russia. So the Austrians asked their German allies for support. Germany promised to support Austria if war erupted. 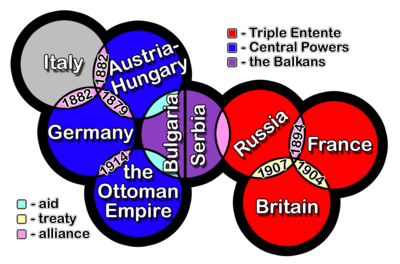 The Serbs counted on Russia for support, and Russia again counted on France to support them. France was afraid to end up in a war alone against Germany, they needed Russia as an ally so they promised to support Russia if a war broke out.

Austria declared war on Serbia July 28 1914 and Russia immediately mobilized its army including forces on German borders. Germany then declared war on Russia on August 1. and on August 3. on France. The Great War had begun.